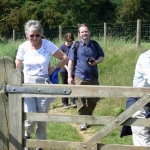 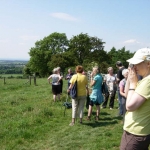 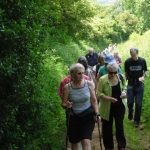 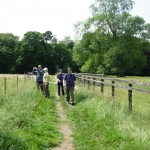 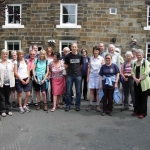 AOSA 2010 Reunion Walk20 of us gathered outside the Meeting House in glorious sunshine and revealed to each other our names (some hesitation remembering maiden names!) and the date we left school (a range of Brian Sayer -1949  to Tim Green – 1992).  It was interesting but in some ways did not matter as Aytonians manage to have friendships across the years, sometimes sharing memories of another scholar or a teacher, sometimes just a possibly mythical story (was Lettuce Hall really thrown down the iron stairs in a laundry basket by Tanner Jackson?)

We braved the California traffic to enter St (should that be Sir?) John’s Fields, enjoying the shade of the woody bits and rejoicing that the story of the demise of Captain Cook’s Monument, which we could see still in place, was unfounded.

Care was taken across the railway line as there are still trains running and we climbed up to the path along the Winstone Dyke.  As this brought us to Aireyholme Lane, questions were asked and sometimes answered about the whereabouts now of OS who had lived here and in Dykes Lane.

The bottom of the sledging field is fiercely guarded by a gate and barbed wire but actually the shade of the trees through which the official path goes was welcome.  Just before ‘Half Cook’s we pretended to admire the view (Pennines a bit misty but the Wainstones – a favourite place for rock-climbers – were clear) – really a ‘drinks and mints’ stop.
Incidentally, you will not find ‘Cook’s’ on the map – it is Easby Moor.

Descending through the mining area we wondered how many tales Harry Snalam would have told had he been with us (some mines are still accessible but entering is unwise as the air is bad).

Where the road from Fletcher’s farm (now also a cafe) meets Little Ayton Lane at the bridge, Vivienne Flynn remembered that this was ‘half way round the island’.

Shortly before Evelyn Nicholson’s house, we cut along the path so as to cross the fields behind Top Field with a good view of Ayton village people using the fields and of the Pavilion. The path comes out beside the re-sited pissoir and just opposite Suggitts, for all who wanted to cool down with that familiar taste (if slightly smoother texture).

It might be time for a change of Saturday afternoon activity next year but I would still be interested to hear if anyone has a ‘favourite haunt’ these walks have not visited (?the viaduct and Bluebell woods?).